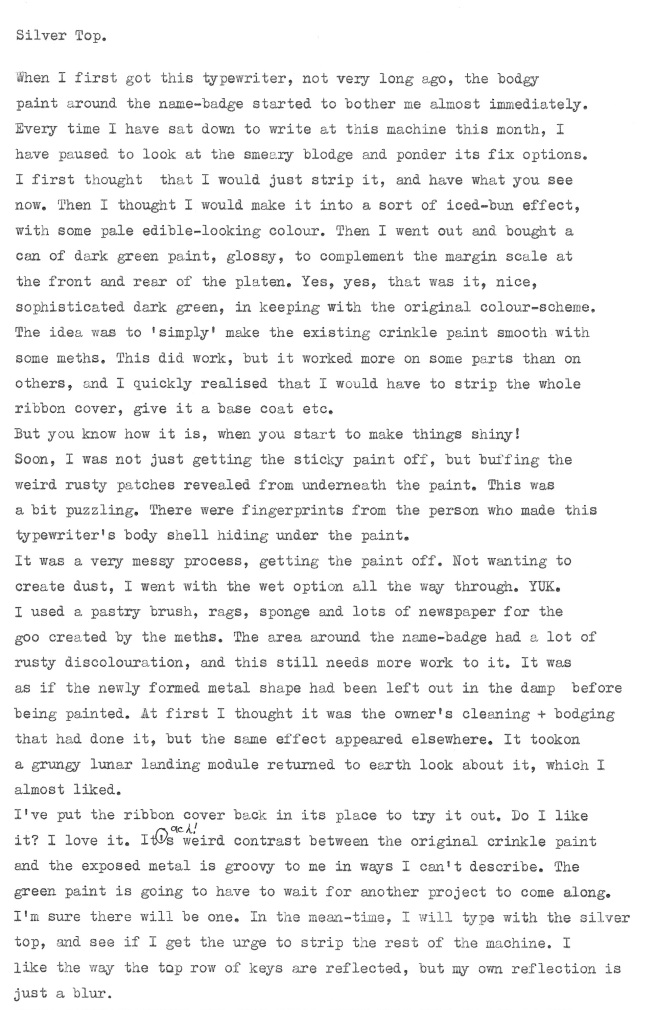 Some acrylic silver paint in the gaps on the name badge, applied with a tiny brush. Any mistakes can be easily removed with a tooth-pick. 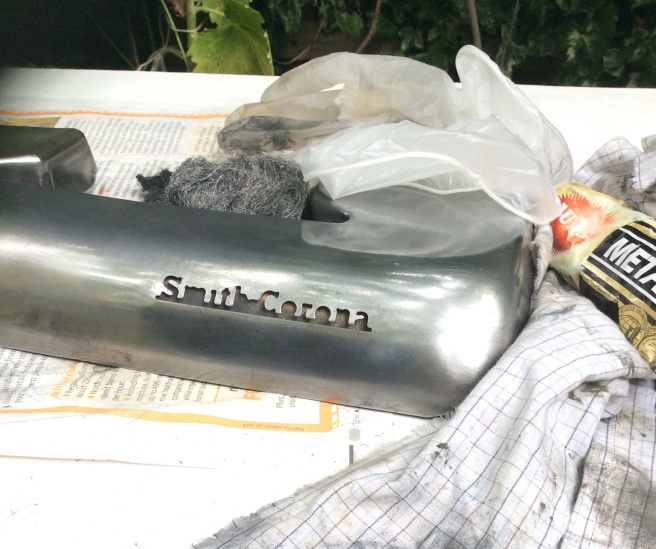 Elbow Grease, because that way, you can still hear the birds sing. I may be some time over this one.

Watching Mhairi Black’s maiden speech in the House of  Commons, yesterday, I was bowled over by her in every way. She is a brilliant speaker, and I look forward to hearing more from her. She was elected before she had even finished her degree in Politics at Glasgow University, graduating this summer with First Class Honours. Degrees in Scotland are four years long. She’s quite something.

[edit] the internet is often great, but often gets stuff confused. while mooching about i found a tweet miscrediting my work, so, just to straighten things out, my name is Martha Lea! thanks for stopping by 🙂

The platen on my Remington Portable no.1 was pitted and hard and not very good. I tried scrubbing it with Cif kitchen cleaner, which worked a little bit in making the rubber more grippy, but the typing was LOUD. So I sent off for some heat-shrink tubing. This stuff was 35mm diameter unshrunk, and about £3.50 f0r half a metre, enough for two platens. Or a mistake and a retry. My platen was a slim 26mm in diameter after my scrubbing – I didn’t measure it before the scrub but the difference was unlikely to be measureable with the calipers I have anyway. I spent about 15 minutes this morning with a hairdryer on full-blast with a test-strip of the tubing on a rolling pin – to absolutely no effect whatsoever. Not having a heat-gun, and not wanting to buy one specially for this job, I put the electric grill on my oven on high and shoved the rolling pin under. Bingo! Shrunk before my very eyes. The rubber, not the rolling pin. Almost in a fever of excitement (really) I prepared the platen – ie, take it out of the machine, and shove it inside the tubing. The shrinking process was really quite simple, but you need to have a pair of oven gloves. I shrank the line-space end first because I had not taken off the metal whatsit doodah – no need, because it all comes out very easily. I lined up the end of the tubing with about a centimetre spare on the end, and turned the platen under the grill. I expect you could barbecue your platen as well. There was almost no smell of shrinking tubing. In fact the smell was less than that you get with cooking Fimo modelling clay. Excellent. Still, I had the windows open anyway.

After trimming with a Stanley knife, I put the platen on a baking tray and gently rolled the platen on that under the heat, taking it out every 30 seconds or so to check the progress. There was a moment of dodgy-looking unevenness going on in the centre of the platen, but it all smoothed out. Like magic!

Getting the platen back in is pretty easy. The new diameter of the platen is 27.1mm or so. I thought it might end up being more, but no.

Right, it’s not perfect. One of the problems with this machine is the lack of cylinder scale and paper fingers. But by ‘eck, this little typewriter is looking and feeling and typing so much better than it was a week ago. An extremely satisfying little renovation project. I also touched up the chipped paint with model-maker’s enamel and a tiny brush. Put some Sugru on the broken paper release lever to save my fingers from nasty cuts, and also fitted in a tiny bit of felt to realign the Q typebar:

Ok, so that’s it, I think I’m just about there with this typewriter. The typing is noticeably less noisy now with the new platen covering, and I am not fearful for the typebars on that hard surface. The only slightly peeving thing is that the punctuation marks still puncture a bit. Too much. But you can’t have it all! 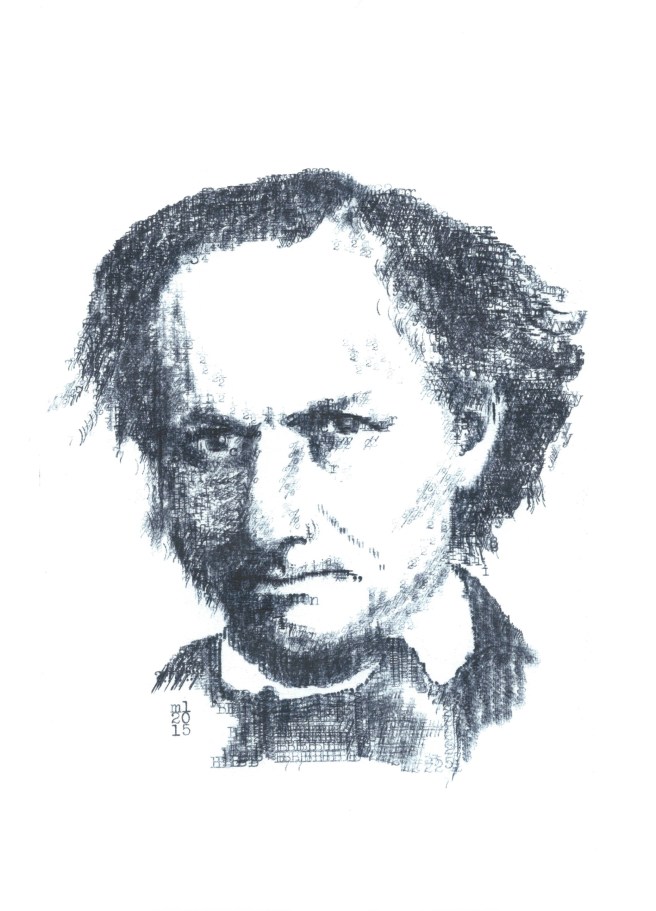 I’m afraid I am still working on my own english translation this evening. Pretty arduous, even for a short piece like this, but rewarding! Dictionary, thesaurus, and conferring with my eldest whose french is tonnes better than mine!  Apologies to those who prefer this in verse. I think this reads much better when set down as prose poetry.

I’ve been putting off having a go at replacing the feedrollers on my Remington Portable no. 1. It just seemed too ruddy difficult. But having a typewriter sitting there all dirty and non-functioning was starting to get to me. So yesterday, I got it out and started to clean it. The platen knob had already fallen to bits in my hands recently while looking at it and assessing its level of awkwarness. This was good, in a way, because it meant that I could now see how easy it was going to be to get the platen out.

The above was taken after the clean-up. This (below) is the way things were before the clean-up and during…

The method of getting the sugru onto the cleaned up metal feedrollers was not really a method. Sugru is extremely adhesive, so you can’t really roll it out and peel it off your clean flat surface. All I could do was make a worm, flatten it in my fingers, press it onto the feedroller while turning it, and watch out for the lasagna effect. Once it was on, I smoothed and rolled until there were no bits catching and it looked sort of ok. I had to keep on moving the carriage along to get a good spot to do each one. I also had the paper release in open position throughout. Left overnight to set, and in all left alone for over 12 hours before replacing the platen.

The good thing about this, is that it comes off (with a knife, carefully) if you want to re-do it or have real feedrollers done. I will be keeping an eye on this set of sugru feedrollers, for durability etc. For now, I am pretty pleased with the result. The back feedrollers are in need of something. They had bad flat spots which prevented them turning at all. I filed those down with an emery board, but they don’t seem to want to do much. I might just try doing one at a time with sugru, if the front ones hold up for the next year or so.

The lack of ‘Cylinder scale’ that also incorporates the paper fingers is a real pain. It would seem that it is crucial for easy paper feeding, otherwise you end up getting crumple under the line guage contraption. But apart from a wrestle to get the paper in without it ripping and crumpling, typing on this old machine is good fun. More work to be done though. 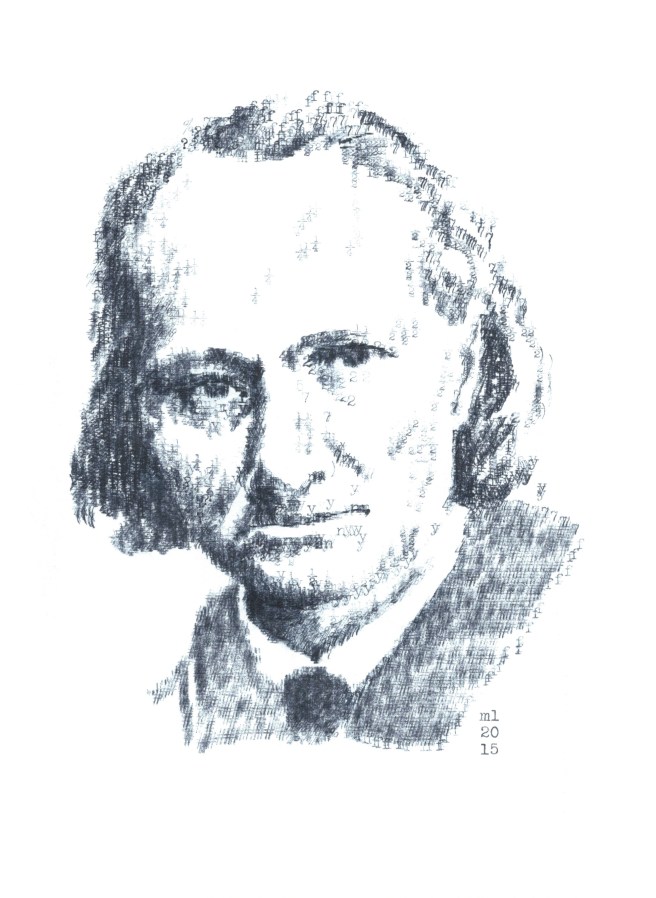