A really smart bit of equipment for your desk! 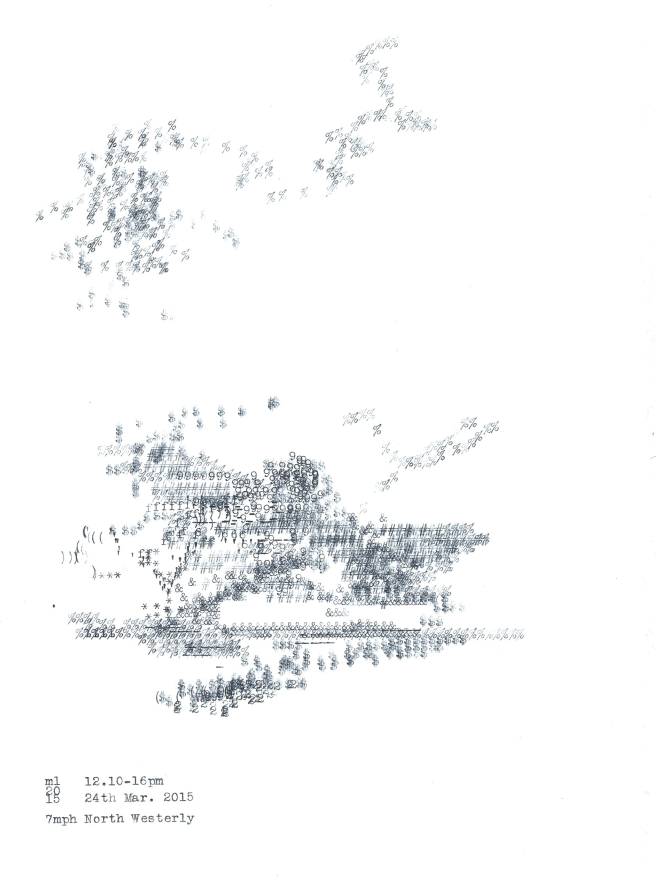 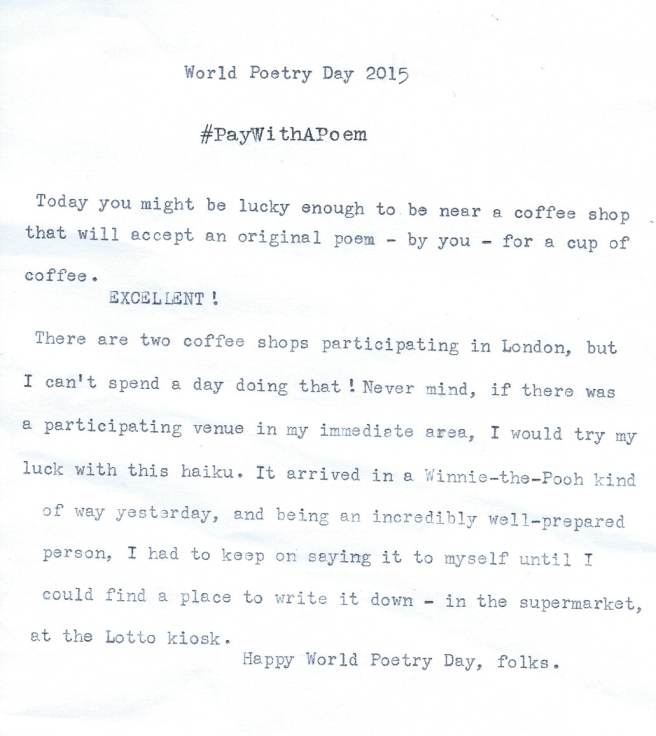 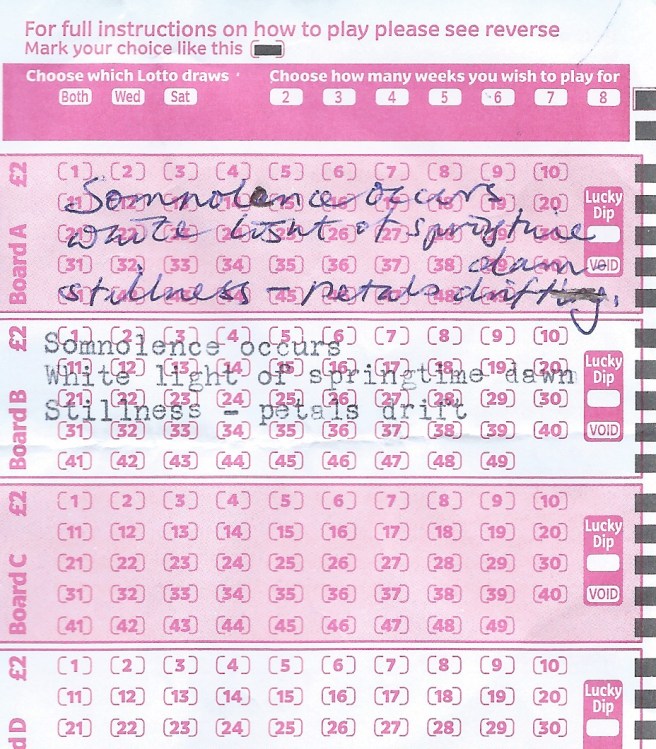 Details of this madcap poetry for coffee scheme can be found on Twitter and Facebook. It is being implemented by coffee-roasting company Julius Meinl, and spread over 23 countries in 1,100 café, bar & resturant type venue hangouts. 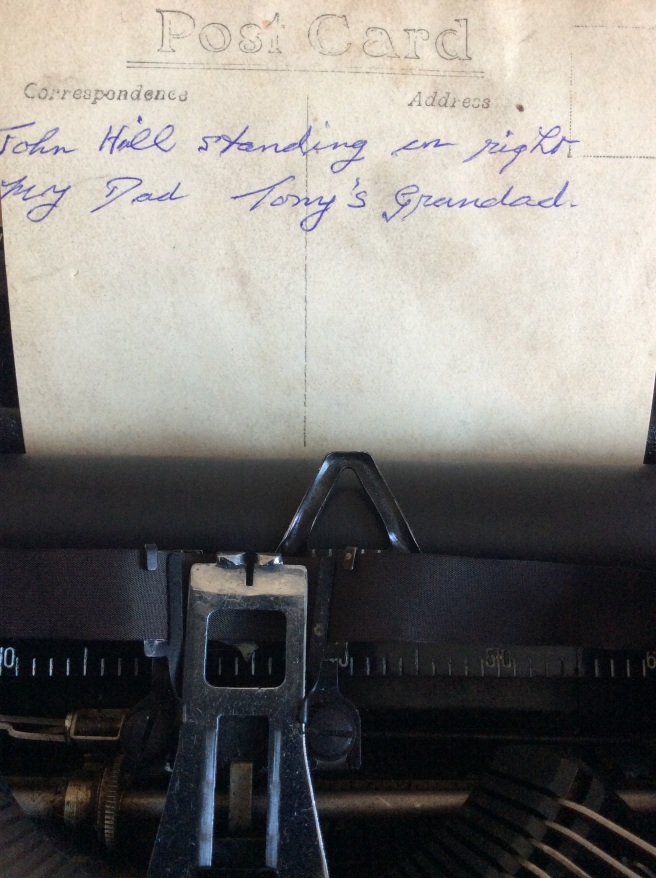 Bingo! The only one with his name on it. 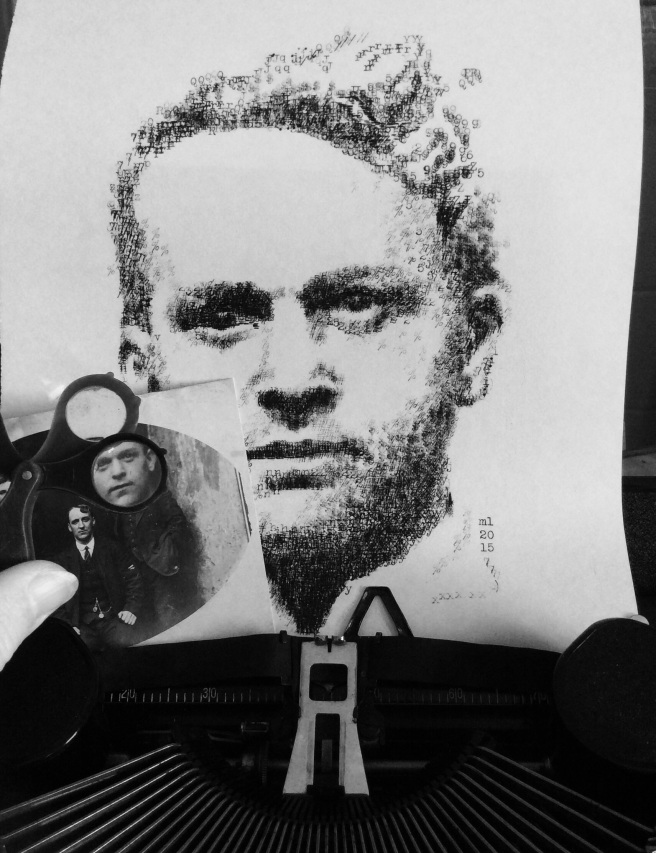 Still a bit of work to do on this one. The man in the centre of the photo is perfectly in focus, but my subject is slightly blurry. I’m intrigued as to the location of the shot. Looks like a place of work, in the background there appears to be some kind of store room, and the wall John Hill is standing next to is rather grubby. 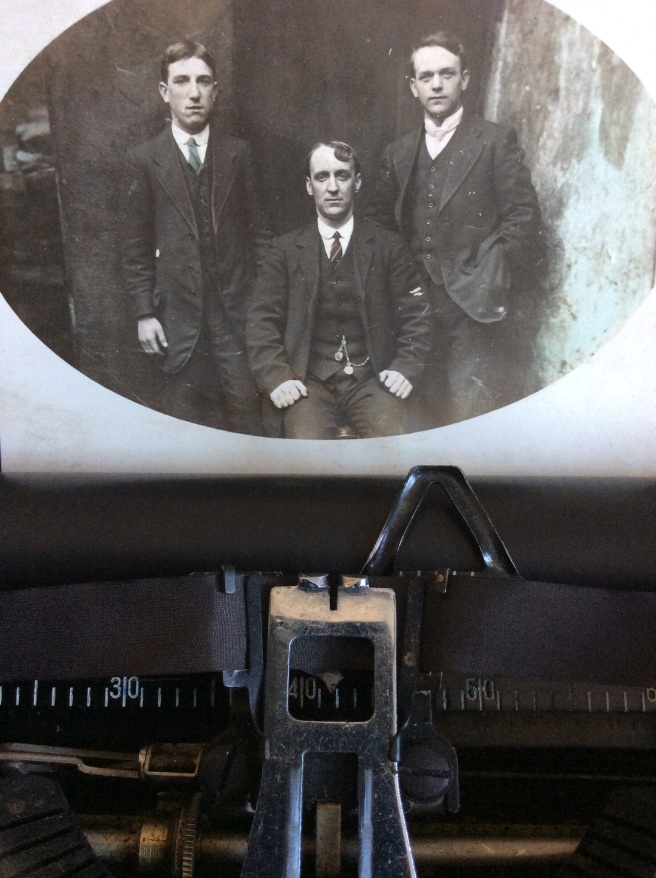 I spent quite a while yesterday trying to work out the year more exactly by the style of the collars and ties. My guess is still that it must have been prewar, so around 1910. Perhaps a little earlier. I like the way he is so relaxed in front of the camera, with his hands in his pockets. And his choice of tie and collar is a bit flash. 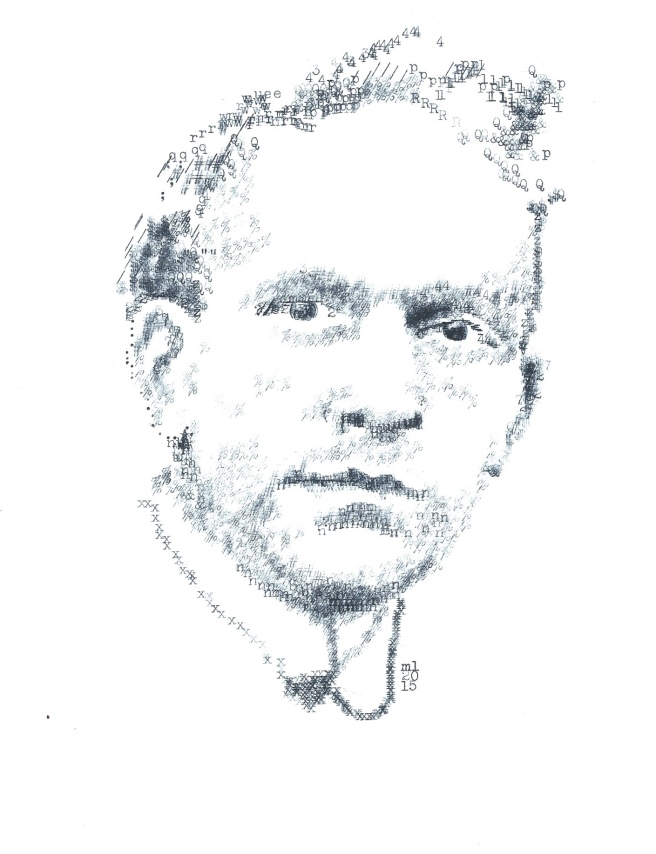 The more I stare at this man’s face, the more I want to know about him. The research is hit and miss – I think I might have found some more photographs of him, but the only clues to dates and names etc are either scribbled on the back of the snaps – or not. So far, I have deduced that he was married, and had at least one child – a daughter, who grew up to have her own children. Of this image, the daughter says, “I think this must be Dad, but it doesn’t look like him.”

Somehow I seem to have given him eyes that follow me – or is that my imagination?! 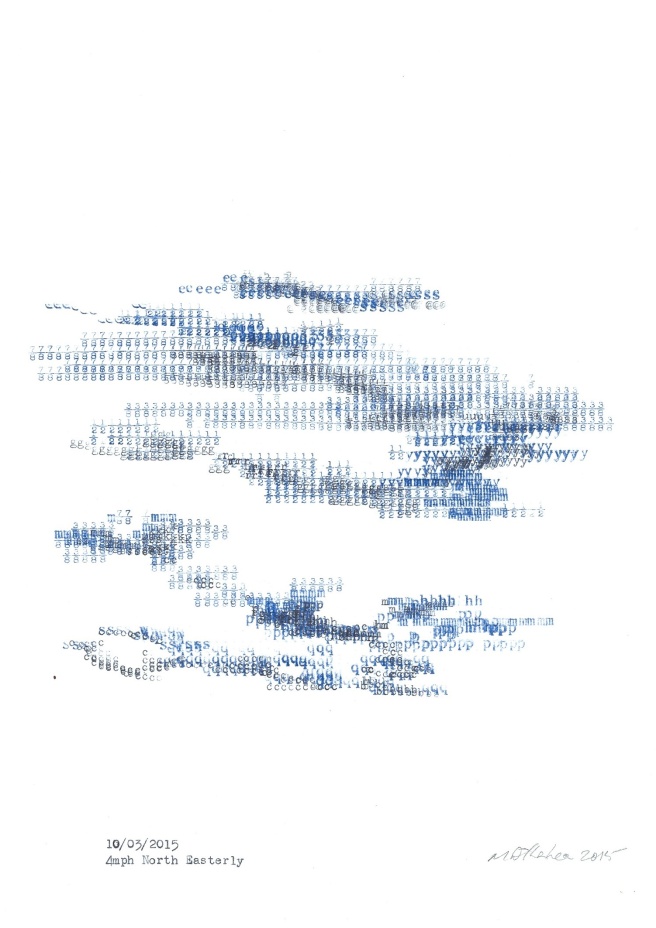 From the Skyriter and Remington Monarch last week. 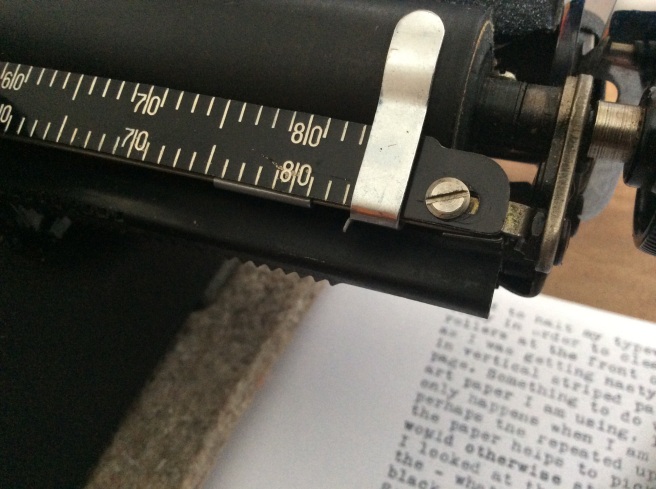 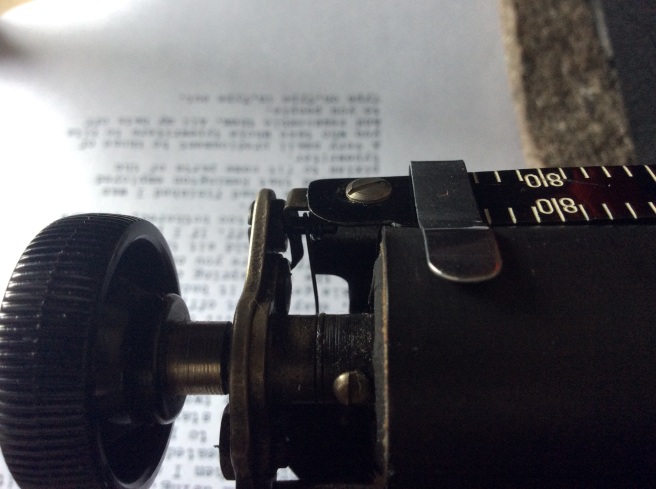 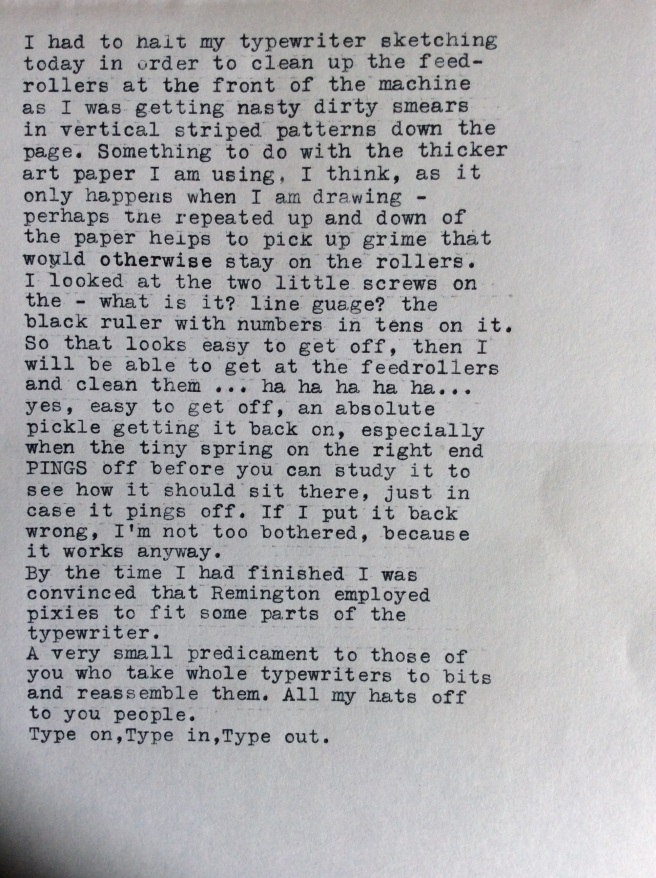 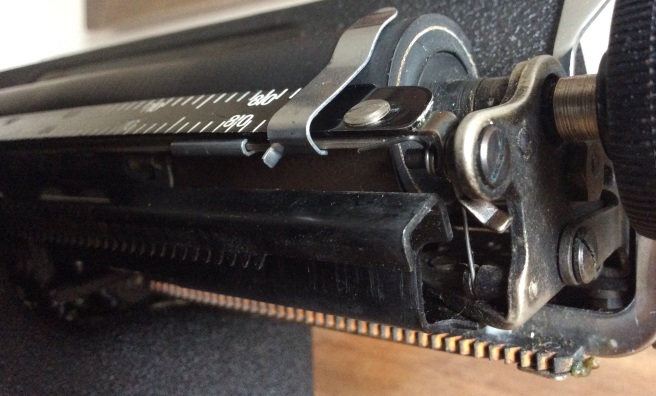 The ruler part needs to sandwich the bracket between itself and the slide for the paper fingers at the back. The bracket helpfully rotates in a wilful way, while you try to get the sandwich together and keep the spring from falling off again. I considered the possibility of taking photographs of my mini disaster midway through the screwing of the screw and thought, well there are limits to my dexterity! The accidental magnetisation of the screwdriver on a previous occasion was a boon to this little fix.

So back to the typing. Did I succeed in eradicating the dirty smears? Unfortunately not so much. Back to making eraser crumbs, then!

Type The Clouds
Blog at WordPress.com.